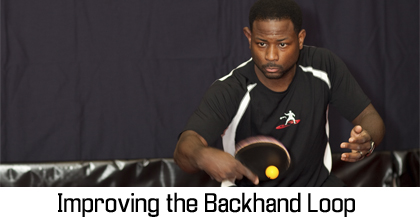 Through your Table Tennis progression it is going to become painfully obvious that for you to be competitive, you are going to need develop your backhand loop. Because of the range the forehand loop can cover, the backhand loop is usually developed as a way to fully complete the entire range of attack.  Most players that have developed the backhand loop have a much bigger program. And that is to be able to actually implement it into the game. The problem here lies in how much the forehand loop normally covers the table. For you to be fully actualized as a player, then you need to find a way to “Elevate” your backhand loop. I have met many players that had a pretty good backhand loop in training, only for that same shot to be non-existent in match play. This video article will actually take you through how to elevate your backhand play with the goal of being a more competitive player.

Tip 1: Shot Selection
This is the ground level of your elevation, because you have to figure out where your backhand loop actually fits. If you are going to make room for your backhand loop in match play, it is going to happen because you are moving over your forehand attack. You have overused your forehand for years, and it has happened so much that you don’t even notice it. It is hard to notice it on video because you are spending your time focusing on how the forehand loop impacted the point.

The advantage to having the right foot back, is it makes it is easy to pivot into the forehand attack, like the video below.

Drill 1: Here is a drill that can improve your ability to balance your foot position, and it’s called “Middle/Corners”. From the forehand position your partner will play one ball to your middle, and you make a forehand loop. Then your partner has the choice to make a block to your wide forehand, or wide back. You can observe the drill here.

If you are attempting this drill the most common error you will encounter is getting to the backhand loop to late. It comes in the form of preparing for the forehand when the player has blocked down the line to the backhand, like the video below.

The other way you will get to the ball late is by your partner blocking outside the range of where your backhand loop is, and you can observe that from the video below.

In a future video I will go over some other ways you can improve your backhand loop to improve your tournament play.

You can get both of these videos by clicking on the products page, and start improving your backhand loop, today.

Live to Play. Loop to Win