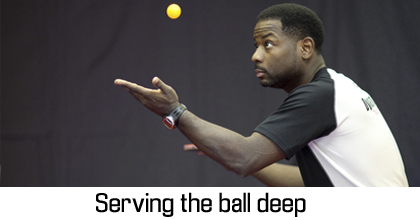 Table Tennis Serves – Serving Deep
One of the most unique skills you can develop in table tennis is the ability to serve the ball deep. The Table Tennis Serve is something that has been overlooked as far as how much value it can bring to setting up your sequence of play. Developing your table tennis serve that travels deep can have a huge impact on the game. The deep serve provides several benefits that can improve tournament play. The first thing that want to establish is the actual serve mechanics, and for that happen, you have to break the table down into quadrants. Quadrant 1 is how you serve short, Quadrant 2 is how you serve medium, and Quadrant 3 is how you serve deep. Quadrant 4 is how you serve off the sideline of the table. 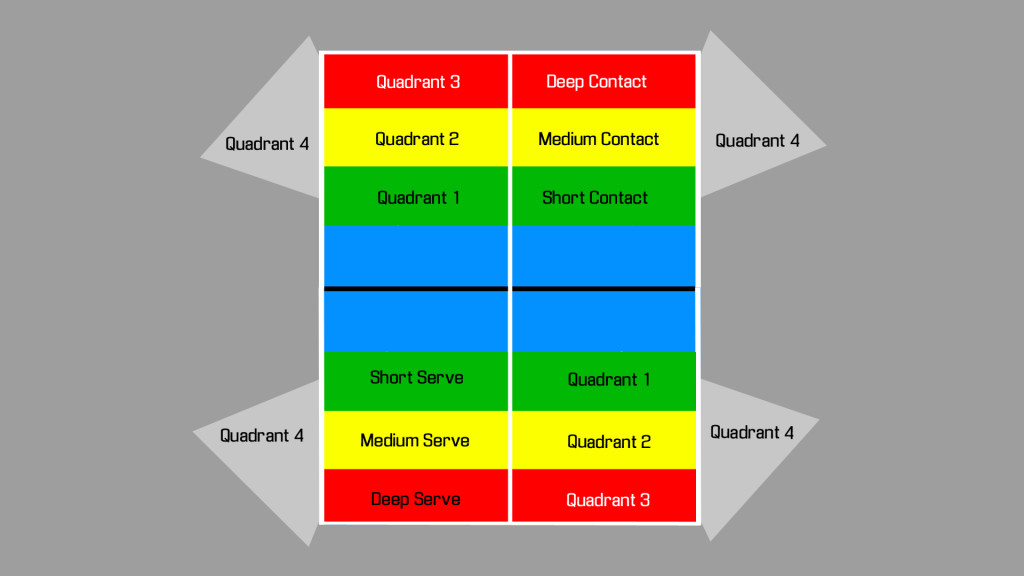 This is the systematic way to view the table for any type of serve that you are going to do. The goal is for the first contact, and the landing contact to make contact in the same color. This will ensure the effectiveness of that serve without make an unforced error. Serving deep is unique to the ball contact landing in quadrant 3 on the server’s side, as well as the ball landing in quadrant 3 on the receivers side, like the image below. 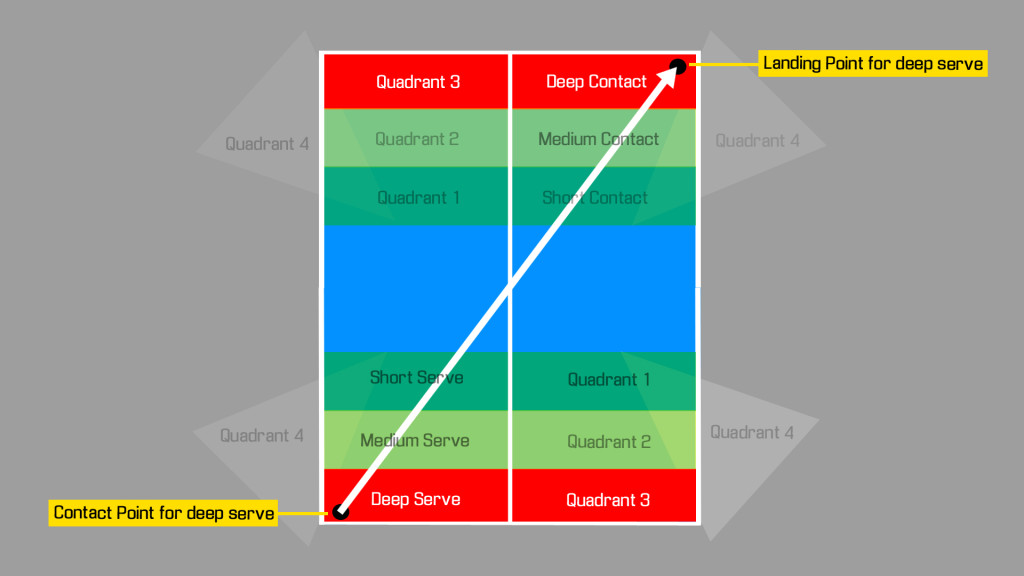 The ball has to be hit hard enough that when it travels across the table it will land in quadrant 3 in your opponents court. The first benefit for this type of serve is your opponent will have less leverage because the ball is landing deep in their court. This is especially effective if you find a player that is crowding the table on their return.The video below is how you can implement this type of serve in training, so you can get the most benefit out of it in tournament play.

If you are going to execute this type of serve is it because you want it to translate into something tangible, and the best tactical advantage you can hope for is to catch your opponent off guard. This will make is possible to take over the sequence of play right from the beginning. In the video below you will see the by-product of the deep serve in setting up the attack sequence.

If you are not going to be making the serve crosscourt to the backhand, then the next best location is down-the-line to the forehand. You need to still make contact in quadrant 3 on your side of the table, with the goal of the ball landing in quadrant 3 like the image below. 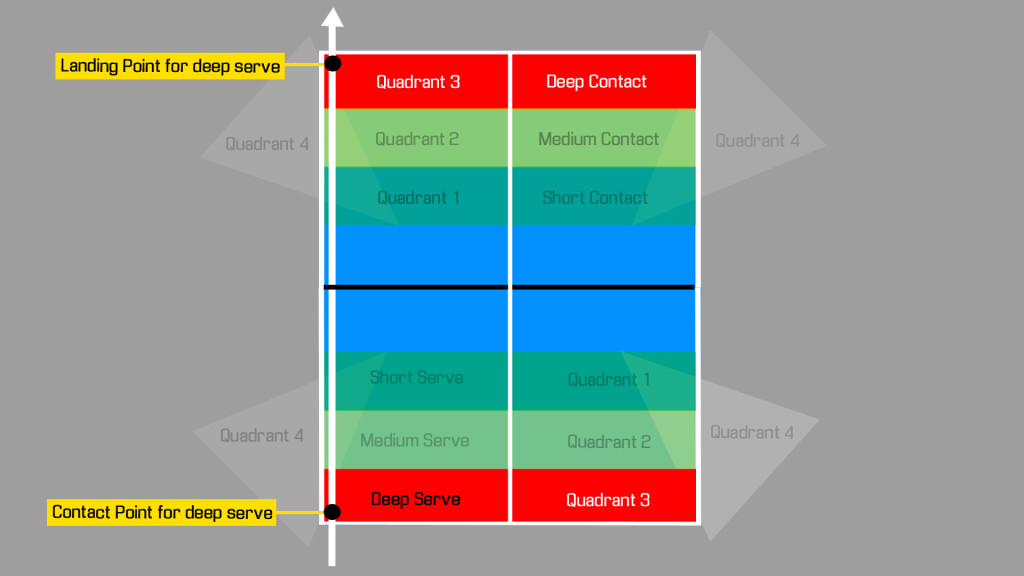 When practicing the serve down-the-line the main theme has to be where the first bounce on your court lands. This will dictate where your serve lands on the far end. Take a look at the video below to get an idea the contact points in quadrant 3 need to land on each side of the court.

The best situation that you can create with the down-the-line serve is the ability to ace your opponent. This can be highly effective when you observe your opponent crowding the backhand corner, or preparing to pivot for a forehand attack. When you look at the video below you can see it is easily the best way to win the point outright.

If you don’t win the point with the down-the-line serve, then the tactical goal will shift to catching your opponent off guard to take over the sequence of play. In the video below you can see how the theme of the point focuses on the topspin play after the fast serve down-the-line.

Now that you have made the serve deep to your opponent’s backhand and forehand, you will start to notice that they will categorically prepare for one position or the other. This is what will allow you to implement the next serve placement, and that is making the serve to your opponent’s middle. The serve going to the middle will disrupt any player because they are not prepared because they are more concerned with covering the wide angles. Your job is to make a real attempt at serving the ball deep to the corners to make your opponent conditioned to be preoccupied with thinking about tow positions.  The video below represents how you can catch your opponent with a deep serve to the middle.  You will see that the opponent is unable to make a fully committed movement to the ball, because they are caught out of position.

I want to explain the last aspect of serving deep, and that is serving the ball right off the end of the table. I call this the icing on the cake. Below is the highlighted area of where the serve needs to make contact with the table to execute this serve. 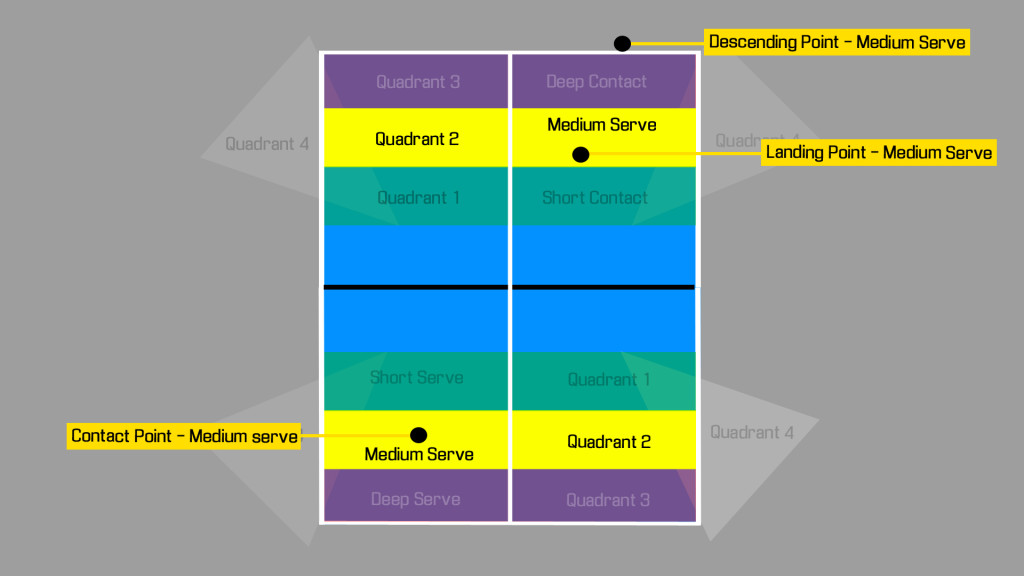 If you look at the image above the contact has to be made in quadrant 2 on the side of the server, and it will land in quadrant 2 on the opponent’s side of the table, and this ball will peak in quadrant 3, and start to descend right at the edge of the table. This important to know because it will give you the jump start on whether or not you will attack the return, or execute a counter-attack. There is a unique few players that are uncomfortable attacking a serve that is landing right off the end of the table, and I’m not one of them from observing the video below.

The reason that I was successful at attacking those serves is I was able to observe the ball contact on the side of the server’s table, and my attack shot was already loaded by the time the ball had reached my side of the court when it was landing in quadrant 2. This meant I would have to position myself partly over the table because the serve was dropping just off the end. I explained this aspect of serving because the serve doesn’t have to always be fast, as long as it is deep. The sequence below explains how I was able to hyper-focus on the art of serving the ball right off the end of the table, which was responsible for me taking control over the sequence of play. It started out with me making a fast serve to my opponents middle only to see him execute a push instead, and you can see that the landing point for the serve was in quadrant 3.

Exposing my opponent with this serve opened up an entirely new tactical sequence of play using my table tennis serve, and the focus was to play the serve to drop right off the end of the table. I had found that person that was uncomfortable attacking this type of serve. That is why the next time I made a serve to this same location, his opening attack was soft and safe. And because it was safe shot, I was able to make a counter-attack to his middle.

The very next serve I went back to the same location, and my opponent made another soft attack, and I was able to make another counter-attack to this middle.

The theme was really starting to reveal itself, and when you find something like this, you want to run it. The reason you can run this repeatedly, is because it is a tactical mismatch. A tactical mismatch is something your opponent won’t be able to response to for at least 6 months of training. They won’t be better that match, later on that day, that week, or that month. The unique identifier that I had found the tactical mismatch is when my opponent started to take the same serve with his backhand from the middle of the table. When you watch this video you will understand how insecure my opponent has become about trying to navigate his sequence of play from the middle of the table.

At this point, I realized that my opponent would be willing to do just about anything to take control of this serve. I wanted him to commit a forehand return, so I decided to make a long, sidespin/underspin serve, deep to the forehand corner. Look at the video and you will see something that is very rare for a player that is considered elite.

Pushing a deep serve with the forehand is the biggest taboo that the player attack sequence has collapsed. Things have gone haywire from a tactical standpoint because the player is thinking about something else outside the range of what is happening. Once this theme presented itself, I decided to take it a step further by making my serve return deep to my opponents middle, where he moved into to attempt a backhand attack, and missed.

I was able to take over the tempo of the match by simply making the serve right off the end of the table. My opponent has been on the US World Team, and has made the Semi-finals at the US Nationals, and this sequence of play looks as if it has reduced him to being nothing more than a club player. Being able to make your serves have variety is the best advantage you can give yourself for tournament play. When training these serves it important to not have an allegiance to a favorite serve, because you never really know exactly what type of serve can gain you the advantage in the match.

Creating a database of serves and serve returns that will make you competitive in tournament play is the reason that Serve & Serve Return Training for Table Tennis training videos were created. Between part 1 and part 2 there is over 4 hours and 10 minutes of instruction on how to develop every serve in the sport of table tennis, as well as how to return those same serves.

If you are looking to improve your table tennis performance and win, Dynamic Table Tennis is the way.

My name is Brian, and I’ll see you on the table.